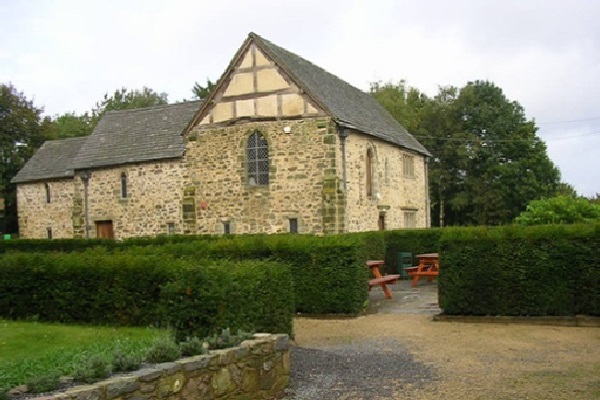 Donington le Heath Manor House, a Museum attraction, is a surviving example of a manor house built around seven hundred years ago in Donington le Heath, near the town of Coalville, Leicestershire. It was once owned by a relative of one of the Gunpowder plotters, and is now managed by Leicestershire County Council.

History
• The museum is situated in a medieval manor house, believed to date back to 1280.
• From the style of the architecture of the parts of the building and from tree-ring dating of some of the timbers still present, the present house at Donington was probably built between 1288 and 1295.
• Some of the features of the house along with tree-ring dating of the timbers in the roof show that the Manor House was heavily modernised around 1618.
• It appears that at this time, the downstairs storerooms were converted into a kitchen and a parlour.
• A new roof was put on and the rooms upstairs were remodelled with a new internal staircase.
• Externally, the most obvious addition from this period are the large rectangular mullioned windows.
• At this time, the house was probably owned by John Digby After his elder brother Everard Digby was executed in 1606 for his part in the Gunpowder Plot.
• From 1670 to 1960, the house was rented out as a tenant farm and Leicestershire County Council bought the Manor House in 1965 to preserve the building for future generations.
• The Manor House was opened as a museum in 1973.

• Donington le Heath Manor House was owned, during the 15th and 16th Century, by the Digby family.
• Sir John Digby fought at the Bosworth Battlefield in 1485 for Henry Tudor.
• When Henry defeated King Richard III and became King Henry VII he would have rewarded his supporters and it may be the case that he gave back the lands that the Digbys had lost in 1462 for their opposition to the previous kings.
• During 1574, the property was owned by Everard Digby. Everard was a close friend of Guy Fawkes and he was executed in 1606 for being one of the Gunpowder Plotters.

Museum
Visitors to the Manor House can see:
• Restored rooms and displays on medieval life,
• A series of temporary exhibitions on a wide range of subjects.
• Recently recreated 17th century style gardens with flower gardens, an orchard, herb gardens and a maze.
• The Manor House’s lively series of monthly events that use re-enactment, crafts, hands-on activities, and
• Specialist demonstrations to interpret Leicestershire's history and archaeology to visitors of all ages.
• The Museum also houses the stone barn Classics Tea Room, which serves home made cakes, light meals and refreshments.

Donington le Heath Manor House Museum also has an experienced education team that can offer a wide range of workshop and outreach sessions which aim to make learning fun for children in Leicestershire.
Friends
The Friends organisation for Donington exists to support the museum's further development through fundraising, help with events and guided tours and to help research the history of the Manor House building and its locality. The Friends of Donington le Heath Manor House is a Registered Charity.