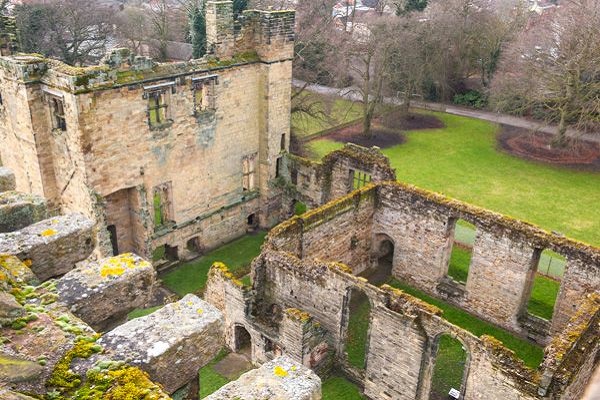 The site of Ashby de la Zouch Castle was originally occupied by a small fortified manor house which was built around the time of the Norman invasion. Mentioned in the Domesday Book of 1086, the property was owned by the Earl of Leicester. It was subsequently granted to the la Zouch family who held it until the end of the fourteenth century.

Ashby came into the ownership of William, Lord Hastings in the mid fifteenth century. He had risen to prominence during the Wars of the Roses where he was a key supporter of the Yorkist cause. He led the Yorkist right wing at the Battle of Towton (1461) and was knighted on the field by the victorious Edward IV. In the years that followed he benefited from numerous grants of lands including Ashby. In 1474 he sought Royal permission to crenellate (fortify) Ashby and his other his manors at Kirby-Muxloe, Bagworth and Slingsby. Work had already begun by this time though; Lord Hastings had commissioned upgrades at Ashby no later than 1472 which he sought to convert into his primary residence.

Come and find out about the castle’s colourful history with our lively audio tour. Hear how Edward IV’s Chamberlain Lord Hastings added the chapel and the impressive keep-like Hastings Tower – a castle within a castle.

Visitors can still climb the tower today despite it suffering massive damage during the Civil War. There are great views from the top! Then make sure you discover the underground passage from the kitchen to the tower, probably created during this war, which can still be explored today.

Don't Miss
Walk the underground passage between the tower and the kitchen
Be amazed that you can still climb to the top of the half ruined tower
Find out more about the castle's dramatic history in the company of our amusing audio guide.

~Things To Do and See in Leicester ~ Attractions, Activities, Places to Visit in Leicester~