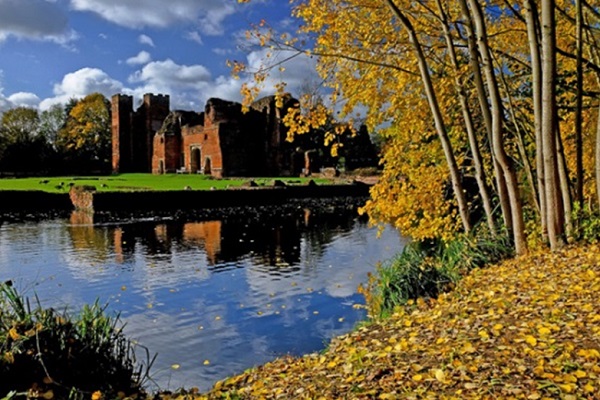 History
• William, Lord Hastings, began work on the castle in 1480, founding it on the site of a pre-existing manor house.
• William was a favourite of King Edward IV and had prospered considerably during the Wars of the Roses. Work continued quickly until 1483, when William was executed during Richard, Duke of Gloucester's, seizure of the throne.
• His widow briefly continued the project after his death but efforts then ceased, with the castle remaining largely incomplete.
• Parts of the castle were inhabited for a period, before falling into ruin during the course of the 17th century.
• In 1912, the Commissioners of Work took over management of the site, repairing the brickwork and carrying out an archaeological survey.
• In the 21st century, the castle is controlled by English Heritage and open to visitors.

Design
• The castle was rectangular in design, 245 by 175 feet (75 by 53 m) across, and would have comprised four corner towers, three side towers and a large gatehouse, all protected by a water-filled moat.
• The centre of the castle would have formed a courtyard.
• Of these buildings, only the gatehouse and the west tower survive today, partially intact. They are constructed with decorative brickwork and stone detailing, in a fashionable late 15th-century style, and have various symbols built into their walls using darker bricks.
• Twelve gunports for early gunpowder artillery were built into the walls of these two buildings, although historians are uncertain whether these defences were intended to be practical or symbolic.
• The government body Historic England considers the castle to be a "spectacular example of a late medieval quadrangular castle of the highest status".

Go to the Kirby Muxloe Castle website to read more…