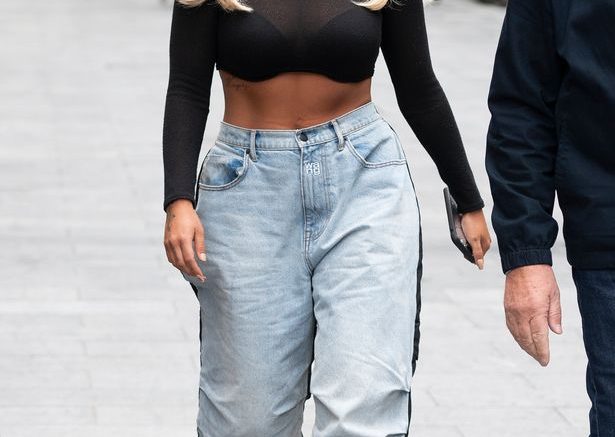 The 29 year old Shout Out To My Ex singer, who is dating Our Girl actor Sean Sagar, oozed confidence as she strutted along central London with her bandmates.

Jesy’s hair looked dramatically different to the gorgeous wavy, brunette style she had been flaunting in photos during lockdown.

Singer Jesy wore her hair in a sleek, down hairstyle with a side parting and small flicks at the ends to give a chic finish to her hair.

But the most noticeable difference is that the star has now dyed her locks blonde.

Stylish star Jesy, who recently said she has gained weight as she shared an empowering message, flashed her stunning abs as she wore a black mesh long-sleeved crop top and a pair of light blue denim high-waisted jeans.

Jesy accessorised her look with a pair of black sunglasses and some black high-heeled ankle boots with a pointed toe.

The singer looked fiercely confident ass he was joined by her Little Mix bandmates Leigh-Anne Pinnock,Jade Thirlwall and Perrie Edwards as she left the Global Radio studios in London.

Leigh-Anne, 28, oozed class as she stepped out of the radio studio, which is home to Heart Radio and CapitalXTRA, in a long-black dress with a leather look collar, tie-waist belt and tie cuffs.

The stunning star finished off the look with a black and gold cross-body handbag and a pair of black court heels.

Meanwhile Jade, 27, kept things casual as she sported a light purple t-shirt with an illustration of a koala bear on, which she matched with a pair of light denim jeans with a rip in one knee.

She had a disposable face covering over her mouth and nose and tanned backpack on her back as she strolled along with her band.

And Perrie was snapped smiling widely as she wore a navy blue jumper with the American flag on and a pair of beige trousers which were tied into a bow at the cuffs.

She accessorised her trendy ensemble with a pair of beige, strappy high-heeled sandals, a beige clutch back and a pair of white sunglasses with reflective lenses.

The band recently announced they are launching their own BBC talent show, called The Search, in a bid to find the next biggest pop group.

In a promo video for the show, Perrie told the BBC: “We can’t wait for everyone to finally see what we’ve been working on because it’s so good! This show is something we’ve wanted to do for a long time.”

Jade added: “The auditions were great fun to film. So much talent auditioned for the show that it was genuinely tough to decide who should go through. There are lots of twists and turns.”