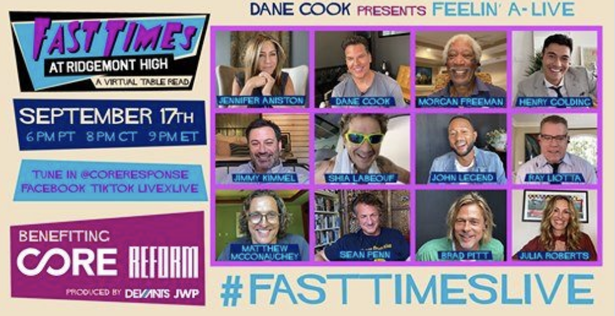 Brad Pitt and Jennifer Aniston have reunited for the first time in months at a virtual table read for Fast Times at Ridgemont High.

The former flames, who are said to have an unbreakable bond, were set to meet once again earlier this year for the charity event, but it was postponed in August due to technical difficulties.

But, a promotional snap for the event sees Brad, 56, and Jen, 51, smile as they appear together amongst co-stars including Julia Roberts, Matthew McConaughey and Sean Penn.

Friends actress Jennifer looked simply stunning as she wore her honey-blonde locks down and wore a hint of makeup to compliment her natural beauty.

Jennifer wore a navy blue sleeveless blouse and smiled at the camera as she sat in a plush beige chair.

Meanwhile, Brad grinned widely as he leaned in towards the camera as he wore a green T-shirt.

Brad donned a rugged look with his blonde tousled locks and a grey goatee.

Actor Brad is said to have been “quick to sign up” for the movie once his ex-wife Jennifer accepted her role.

The duo’s reunion comes months after they were seen for the first time in public after their divorce at the SAG Awards in January this year.

Brad and Jen reportedly rekindled their friendship following their bitter split 15 years before.

A source said: “They’ve built their bond and rekindled their friendship so much more than it was the past few years now that they’re both single.

“They’ve realised what’s important in life and since they shared so much love for each other it’s such a nice thing for them both to have this kind of close friendship again.

“They trust each other and love the fact that they have someone who has their back, especially in Hollywood where trust and real friends are at a minimum.”

The reunion between Brad and Jen appeared to ruffle Brad’s ex wife Angelia Jolie’s feathers as she appeared to throw shade at her ex husband in her column with Time magazine.

Writing about children’s needs within the pandemic, she appeared to take aim as she wrote: “They just want you honest. And doing your best. In fact, the more room they have to be great where you are weak, the stronger they may become.

“They love you. They want to help you. So in the end, it’s the team you build. And in a way, they are raising you up too. You grow together.”